Homepage Life with dogs It starts with finding the right dog 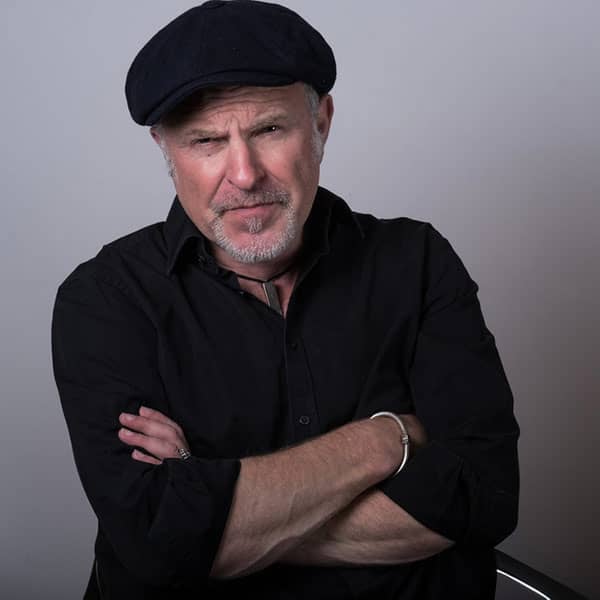 Simon Evans is one of the UK’s most respected and best loved comedians. Away from comedy, Simon enjoys many of the good things in life—wine, whisky and song, classical music, walking his Golden Retriever along the Sussex coast and doggedly trying to clear his reading pile. 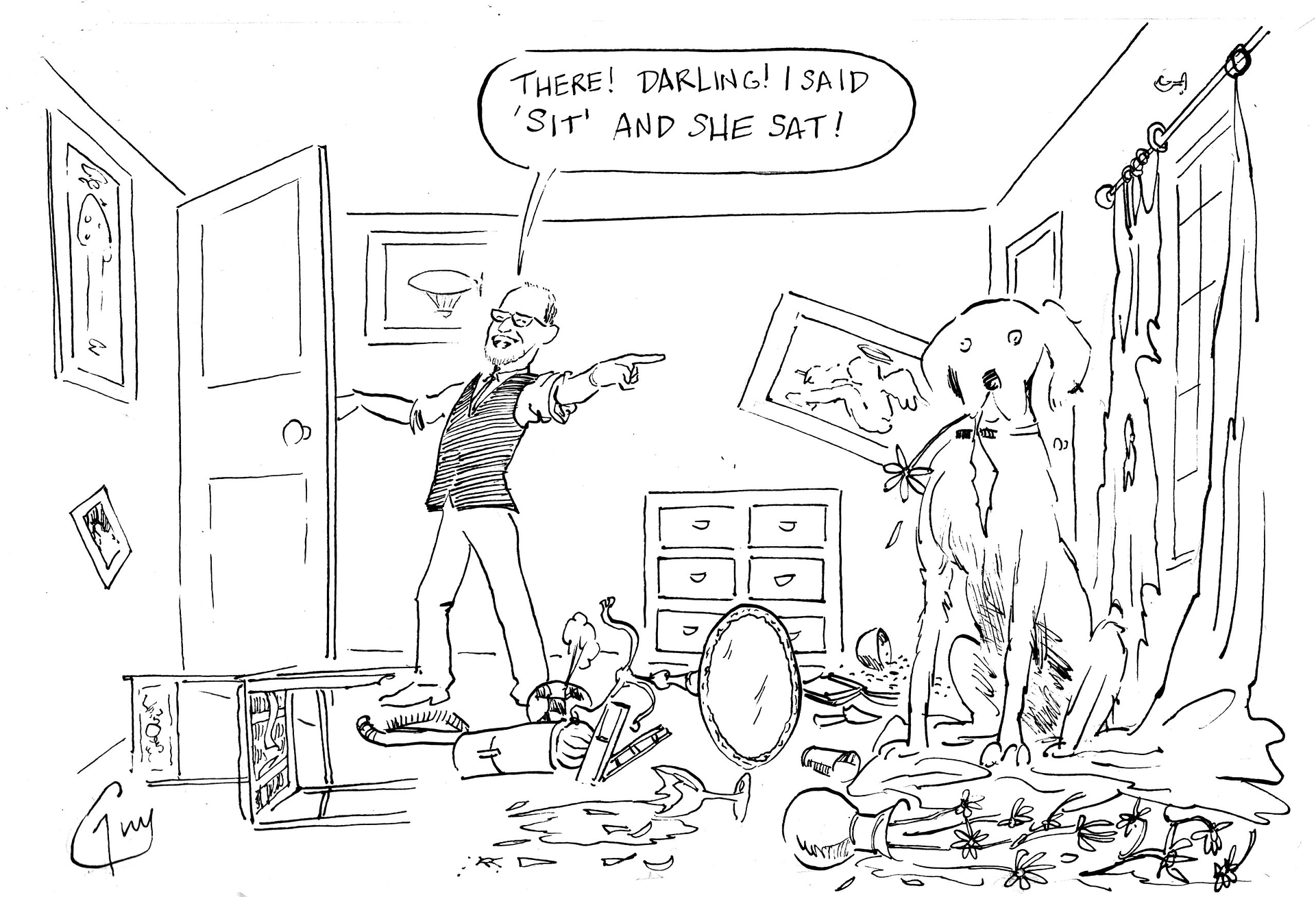 In 2013, after unrelenting and surprisingly well-organised pressure from my nine-year-old daughter, I finally caved in and bought a dog. As I used to joke in the stand-up routine I wrote about it afterwards, having done so, I soon wished we’d done it years ago. Because then it might be dead by now.

That was of course a bit of poetic license. For a start, the dog was no longer living with us by then, so to wish death upon the poor beast would have been churlish. It had gone to live, not on a farm, but with my In-Laws. Still, it was, during its brief tenure in the Evans household, unquestionably a source of more stress and frustration than the propaganda would have you believe.

Can you choose a breed from a book?

It was largely a question of it being the Wrong Breed. This was my fault. My daughter had purchased a book entitled “What Dog?” – which somehow seemed to successfully sidestep the question posed by my copy of “Why Dog?” – and this was regarded as the official authority on the matter.  But I had grown to resent the Book’s seniority over me.

In the Book, breeds had been subject to multivariate analysis, and ranked, as might be footballers or fighter jets or sharks in more useful publications, of the sort enjoyed by me and my son. They were scored for Intelligence, Health risks, Feeding Costs, Leave-Alone-Ability, Barkiness, Park Cachet etc etc. The data were comprehensive.

But there seemed to be surprisingly little ambivalence on these grades, I noticed – they were baked into the breed. There was no Blank Slate nonsense in dog world.  Border Collie Supremacists could be challenged only on the data, on trophies won and sums paid at auction, not on egalitarian principles or factoring in their “privilege”, of perhaps being trained well, and enjoying a warm and secure home. This gave the book the air of unearned conviction, of credentialism, for which I nourished a contempt.

Nevertheless, if consulted briefly and with determination, the Book should have enabled us to select the perfect breed for our need. Instead, we all studied this book so long and so hard and weighed up the importance of the respective criteria so anxiously that we passed through the stage of being well-informed and were soon waist deep in “Information Overload Paralysis”.

It was impossible to say whether the modest costs and reliably good attitude to children of the miniature Schnauzer were sufficient to offset its “Yappiness”, or whether the undoubted huggability of a Newfoundland, or better yet the handsome Leonburger, would be sufficient to warrant the initial outlay, the need to remodel the entire ground floor and to forego overseas holidays for the next seven years.

This went on so long I eventually bought another book, a book about decision making, the sort of thing you’d see at airport bookshops in the good old days. Full of flow charts and updated digital versions of the I Ching, it was intended to propel the ambitious from middle management into the top floor glass-walled corner suite, not help people choose dogs, but it seemed worth a try, to break the deadlock.

I couldn’t decide which method to use. There were dozens of them. Hopeless.

Then one day, while walking alone across the South Downs (thus proving that we didn’t really need a dog anyway, this sort of activity always being given as the prime motivation for saddling yourself with one) I saw a promising-looking animal coming towards me down the track. Athletic, lean, serious and being walked by a man in tailored clothing, which I took to be a good sign. I introduced myself.

The dog, the man said, was a Vizsla. Or possibly a Viszla. The more I looked, the more convinced I was, that here was the answer. It had all the qualities I’d looked for – handsome features, beautiful tone and the appeal of the faintly exotic. As I look back – as I have done on countless occasions, searching for the clues I missed – I can see none of the character flaws that were later to become apparent in the example of the breed that we later netted. None of the skittishness, the frantic anxiety, the tension that defined not only ours but, anecdotally, the breed as a whole.

I mentioned that my family were keen to get a dog and wondered whether he’d recommend the breed? Oh, yes! He said, unequivocally. Great family pets. That’s what he said. Why, I don’t know. Mischief? Spite? Had I somehow slighted or insulted him, without realising it, and provoked him? Or is this how the Viszla spreads, how it keeps its R number above 1.0, through wilful blindness and mendacity in those afflicted?

None of these scenarios occurred to me. I went home, knowing only that I’d cut the Gordian knot and was about to become a popular Dad again. There was no mention of the Vizsla in the Book – this was part of its appeal, its ranking was “unknown” – always a winner in the games of Top Trumps I’d enjoyed as a boy – though we did check on line, and discovered that there was a Brighton and Hove Vizsla Association. I have since discovered that this is more of a support group.

Long story short, two months later I ended up at a breeder’s just outside Coventry. I entered the sitting room, through a sort of airlock, and was met by what seemed to be almost a weather event of Viszlas. They were everywhere, and their speed and position were, like those of elementary particles, impossible to know at the same time. The sense of diffuse energy in the room was exhausting. But the breeder assured me that this was an artefact of my arrival and not intrinsic to the breed. Isolated, he said, they once again became subject to gravity.

I was not at all sure. This was not the sort of thing I had seen on the Downs, at all. I rang my wife, and related my doubts. She told me that the family had had enough of my hesitations, my commitment phobia, and that I was to come back with a puppy, or not at all.

I weighed up my options, but I had only packed an overnight bag and couldn’t really face the paperwork a divorce would entail. I went back in, signed, and handed over the cash.

We tried to make it work. Honest we did. But the dog just emanated a nervousness, radiated a precarious mental state so unsettlingly onto the other occupants of the room, that we could not bear to be around it. It was a phenomenon I had never before encountered outside the pages of Edgar Allen Poe.

It was just over a year later, and I was on tour, when my wife phoned me. Her father – a country man, and owner of a pair of well-trained black Labradors – had seen how we were struggling, how she was struggling, with the dog, while I was away, and had offered a solution. He would take the Vizsla for an unspecified period, train her up in the Arts of the Field, proper to her kind, and see her through the difficult adolescent years, enabling her to learn a degree of calm and stoic forbearance from the Labs. She had accepted. It was all she could do not to break in to tears with gratitude.

The Viszla never came back. After the arrival of the animal in her father’s home, both the Labradors and then, very sadly, he himself died, in almost suspiciously quick succession, and the Vizsla, or Viszla, is now my mother in law’s permanent and devoted companion. For her, its neurotic attachment is exactly what she needs and finds most precious in a canine companion. They need one another like love struck teenagers in the first throes.  It is very sweet.

Meanwhile, we let a respectful few months drift by, and then plumped for a Golden Retriever, which had always been the clear recommendation, the single safest option in the Book, one of those choices which had somehow seemed too obvious, almost simplistic, the first time around.

Three years of blissful Golden Retriever ownership later, I can only say, I wish we’d done it years ago. And this time, I really mean it.